and non-toxic way of lithography

created in June 2011 by Émilie Aizier,

Artist pseudonym : Émilion. This invention consists in simplifying globally the technique of lithography, making it much more accessible, and using a non-toxic method with foil of aluminium, cola (soda) and oil...

Lithography for everyone with aluminium foil and Cola !

The old methods of engraving and printing have an inexhaustible wealth of know-how.

For example, printers were once making most inks, varnishes etc. themselves. With its great economy of means, Kitchen Litho offers to everyone the opportunity to experience the technique of lithography at home in their kitchen or in a workshop setting. It is fun and enjoyable to use foil of aluminum and soda to print a pretty picture.

Paradoxically, Kitchen Litho is fully in keeping with "Lithography" devised by Aloys Senefelder in 1796. Indeed, as with lithography on stone, the Kitchen Litho is a planographic printing technique based on the principle of repulsion between water and grease. With its common materials, Kitchen Litho allows a quick start (no graining needed, among others) and the realisation of easy, homemade prints. This new way is a rediscovery, an unusual and contemporary adaptation of conventional lithography. 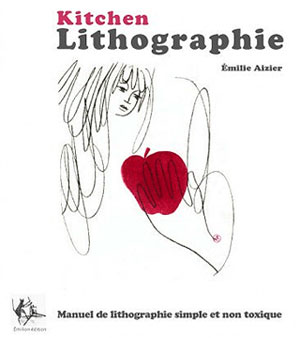 How did the idea come about ?

There was a part of chance in the discovery of lithography, this was also the case with Kitchen Litho. I would like to do lithography again but it was not possible without special equipment, at least. So I started research, made contact and talked with fans of printmaking such as Gary-Thibeau, the intaglio press manufacturer.

He told me about the possibility of drawing on aluminum plate, acidifying with weak phosphoric acid and printing with an intaglio press. I did not know where to find phosphoric acid. He said that there was this weak acid in cola and so I wanted to try.  By chance and magic, tests have functioned immediately with cola ! I first applied the same recipe for lithographic stone that I had learned at the Art Center of Metairie Bruyere in France. 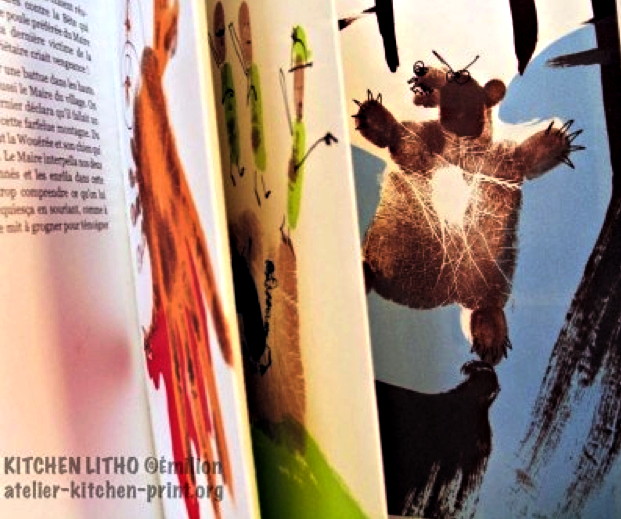 After, I simplified the process and as I had no aluminum plate enough, I thought of using aluminum foil. Finally, for reasons of health and safety, the use of toxic chemicals has been removed. In this regard, I had the pleasure of meeting Filip Le Roy, professor of engraving non toxic in Anderlecht in Belgium and collaborator with Henrik Boegh (co-inventor of non-toxic intaglio).

During a workshop of Kitchen Litho I organized at home. Filip Le Roy tried the technique and added his recipe with beer when the picture tended to make charcoal drawing, as he did before in stone lithography ! It was a playful phase; sharing the joy of reinventing printmaking.

To share and visualize this approach better, video tutorials are available on YouTube. However, the video tutoriel is limited. Like stone, Kitchen Litho is a technique of printing that can be unpredictable and learning in person is best to get started. Lithography is sometimes described as «diabolical craft» by U.S. critics of this technique as I told the artist, printer and teacher-researcher Nick Semenoff.

Himself developed in 1990 a technic of lithography non-toxic, for artists, and he is the father of the «waterless lithography process» (lithography without water). He also expressed his surprise that people who have never done lithography want suddenly try this. The stone is marvellous but the weight is a problem.

Senefelder speaks about this problem in his books and was always researching a solution to use paper instead of stone and metal (metal was expensive in his time). The magic of lithography is still alive and strong in the age of the Internet. Many people around the world begin to create images with Waterless, and now also with Kitchen Litho.

Use aluminum foil you buy in your supermarket. Ensure that the foil is not surfaced with a film of food-grade plastic. Take care in the various processes to avoid offending the foil or leave finger traces. The use of plastic gloves is recommended. Unroll gently without putting fingerprints on the matte side as it is on this side we draw. Cut the aluminum with a large pair of scissors. The format of the foil should be several inches larger than your future drawing. You can tape down foil of aluminum with Scotch tape on a metal plate or better a plastic surface.This aluminum has a nice feel resistance, after some events, there is good stability allowing an edition of more of fifty prints.

To start very fast, you can draw directly on the surface with a greasy pencil 8 or 9B, pencil of colour (childen pencil), permanent marker, ballpoint pen...  In my handbook I explain how we can use grease pastel, indian ink, brush, etc.  Advantages of aluminum foil are numerous. Indeed, thanks to his thickness you can have material effects depending on the surface granular or smooth you use to place the foil. Be careful to draw freehand, aluminum is very sensitive to the skin's grease.

Use of cola or other cola-flavored soda.  You can verify the presence of acid phosphoric or orthophosphoric acid in the composition. Fresh cola is more acid and acidification is quick. You can keep the solution for several days in a bottle. Stale cola also works. Pour cola into a large plastic container and put the foil inside with the drawing face to you. Observe very closely your plate, it is imperative that water or cola clings well all over the white areas. Rinse with a water sponge imediately. The plate becomes hydrophilic due to the action of phosphoric acid and gum arabic contained in cola.

4) WIPE AWAY THE DRAWING

It is a difficult part for beginners.  My video when I use Marseille soap is a little bit old now and not an example for beginners but it is instructive because we see the general process.  http://www.atelier-kitchen-print.org/kitchenlitho . You have to delete all images made with the pencil (or ink) lithographic, otherwise the drawing will clog. Pour a little oil (eg rapeseed) on the plate and wipe gently, lightly and quickly with a soft cloth.  A ghost drawing appears. Finish wiping with a clean sponge and well wet.

Use another clean damp sponge just as you pass the plate. The sponge should be always damp and not dripping when pressed. Sponge with water, allowing to wipe ink on the plate.

a lithograph being printed on a Gary Thibeau intaglio press

Different oil-based inks are used (lithographic etching intaglio inks...). To start, I recommend an intaglio ink for its flexibility. White surfaces will retain sponge's water. By contrast, part of the design is waterproof. It is the technique of Senefelder:  Water refusing grease, you can ink with a roller the surface of the plate. Only the bold lines of the drawing will retain the ink.

Above all, soak the sponge in the tank water and then wring it into an other tank or in the sink so that it does not drop more. Gently and quickly wet the plate with the sponge. Ink the entire plate and also with the sponge. You must systematically wet and wipe just before and after the inking.

For the first printing, ink can be poured four times on the plate. For future prints, must be limited to a one, two or three times roll according to the importance of the drawing's surface. The sponge wil be quickly soiled because it will wet and wipe at the same time the ink on the plate. If gray areas appear on the image, emphasize sponging.  A brush dipped in a glass of cola can correct and clean a gray area or a spot during the inking. Especially don't drink the glass of cola after the workshop ! Indeed, after using cola, some ink has been diluted inside !

Place the rag paper on the freshly inked plate. For more details, you must first wet the paper in water.  An intaglio press makes perfect and regular prints. You can keep the wool felts in place of the press but it is imperative to strengthen the pressure on rag paper. For this, using a plastic plate with a little less than a millimeter thick, then lay over the back of rag paper and then fold over the wool felts.

Without a printing press, you can use for example your thumb in the hollow of a large spoon and rub the entire back surface of the rag paper.

After printing, you can keep your plate for several months with applying thinly gum arabic with a brush and letting it dry on your foil. To reactivate the plate, wipe dry cola with water.

The Kitchen Litho Robot
For this card Emilion worked together with Philippe, her husband.
He's working with data codes.
The image looks like paper currency.
I suggested to apply apples of my "fabrication" (stamps) to finish the image.
Here the article explaining how we made this print.
Indeed, it is a bot which traced the actual drawing.

Some suggested Kitchen Litho links on the web: