enters the history of printmaking

Keith has responded to the necessity of having a method to make prints through a safe and consistent process he calls Intaglio-Type.  This method incorporates the use of ImageOn - a light sensitive polymer film that is laminated to a flexible translucent plate ( important because you can see through the plate in order to register each subsequent layer ).

Over the years of developing techniques (and writing his books about the subject), Keith Howard is often talking about the kinds of techniques one can use to make prints but he does not often speak about what drives him to make his own art.

Since 2006,  Keith has created a large portfolio of  prints on paper that he calls Pause, Fast Forward, & Play .  These prints stand as mature works of art apart from the fact that they sometimes act for a viewer as illustrations of a certain technique.   Keiths artwork can stand up as an inspiration for other printmakers and we can all learn from his example to follow our chosen path.

Keith has a forty year career as a visual artist, and he mentions the influence of his fellow Australians like Sidney Nolan, and the European artist Paul Klee among others.  Keith was born in Sydney, Australia and early in his teaching career at Queensland College of Art he was asked to run their printmaking program. A teacher exchange with the Alberta College of Art in Calgary, brought him to Canada and after this year long stint he decided to immigrate there.  Later on during  his appointment  with Grand Prairie Regional College Keith began to perfect his non-toxic printmaking protocol and the discipline hasnt been the same since then.

In Grand Prairie,  Keith set up summer workshops for artists like myself to come and try out his new methods, put them through the tests, and we came away with really useful ways for making editions.  In a sense the methods produced similar results to Photo-Gravure but the materials were different  much more economical and  better for you and the planet.

In the late 1990s Keith moved from Canada to teach at Rochester Institute of Technology in New York, and there he set up his School for Non-Toxic Printmaking serving the graduate students and undergraduate population with his pioneering knowledge and methodology.  Keith revamped a department to serve the health and well-being of his students and others who come to work in the studios at R.I.T.

Keith also set up a studio in his home where he could practice new techniques for making his images.  The past ten years has seen a burst of energy from Keith Howard in regard to his own art and creative spirit.  Much of his art is based on the use of the digital camera, and the manipulations of the resulting images through software like Photoshop.

Pause, Fast Forward, and Play constitute three series of prints that correspond to

2.  An investigation of mixed media, abstraction and collage,  and

3.  A celebration of life in and around the Caribbean.

Many of these plates and prints were developed while Keith mentored students in his Master Printer class at R.I.T.   Collaborative efforts are fostered in printmaking and David J. Reed helped move forward the four color intaglio-type currently being used today.  For Keith, the new four color printing allows him a unique way to pursue his vision, while cutting down on the costs of creating large scale images on paper.

To describe the prints that make up the series called Pause one can think of an absurd newscast, with a split screen, and the idea is to stop the action and read the tongue -in -cheek texts and speculate about the featured people in each print.

Keith has an eye for types of people to photograph, and he put this together in such a way as to mock the look of T.V. channels like CNN.  The images are not so political as a work by say  Barbara Kruger or Jenny Holzer, the prints are more of a social satire.

Fast Forward builds on Keith Howards experience as an artist in thrall with abstraction.  The imagery can be thought  of as a kind of archeology of magazines and print media as Keith would cut up and re-arrange pictures, actually layers of photos and text found in the pages of magazines.  The slogan The Process is Revealed is embedded in one of the images, and you have to work at these collage pieces to begin to understand what is being shown.  In a way the images are Duchampian  they defy easy classification, and the time element is certainly a factor here.   Once Keith would complete a collage it is photographed or scanned and the four color plates are made one channel at a time.

Play is a series of color prints made with another focus entirely.  Here details from Keiths travels in the Bahamas and elsewhere in the Carribean Basin  are the focus and these prints demonstrate a personal  approach to a location that amplifies the lush colors and pastels of the islands.  The color qualities of these prints demonstrate the delicacy of the range of tonality that you can find in these works by a master printer.  These images remind me of some of David Hockneys art, and also maybe the framing of the images has some of the warmth and humor of Pierre Bonnard.

For Keith he has to be free to go, away from the classwork, and out to explore the world on his own, to find images with which he can resonate.  This and his subsequent art featuring visual essays about the modern Eve, create a body of visual art that needs greater exposure, and recognition for a sizable achievement. 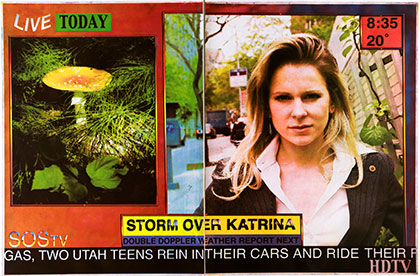 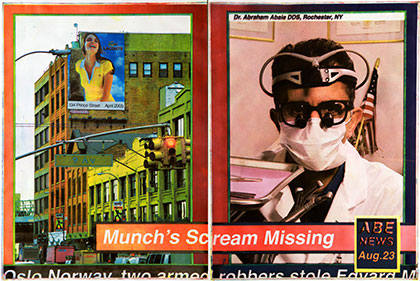 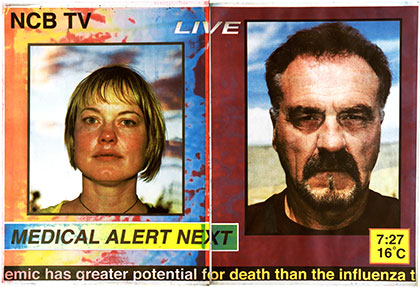 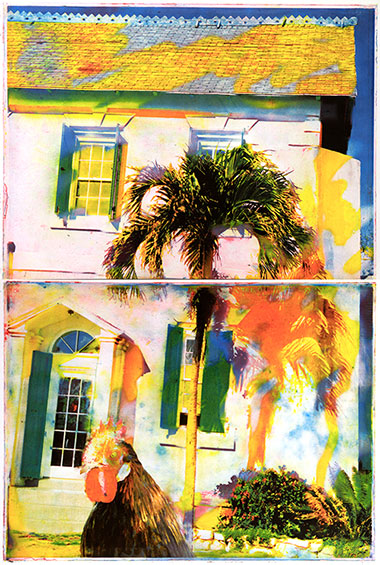 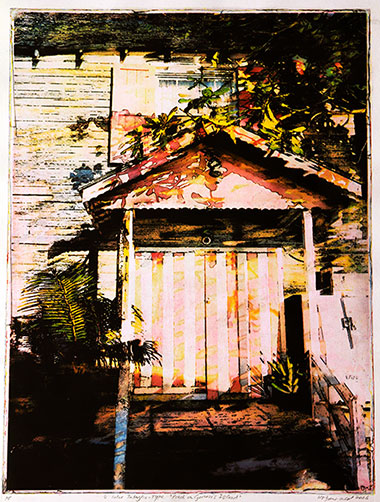 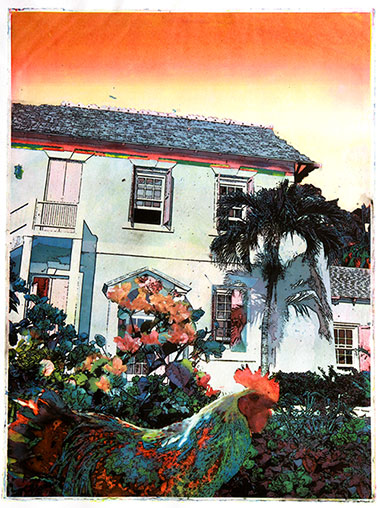 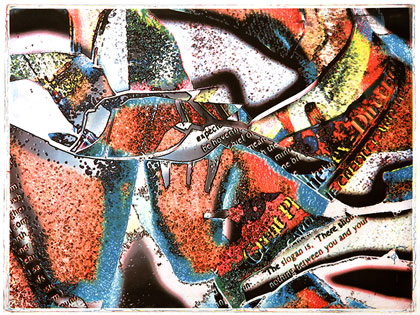 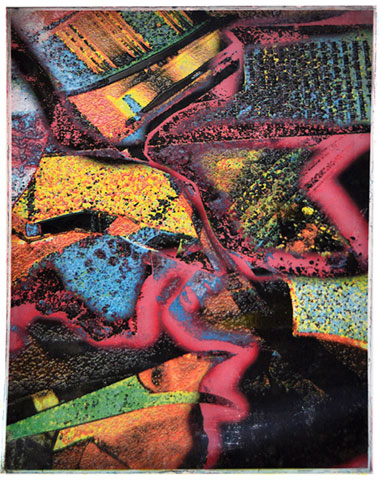 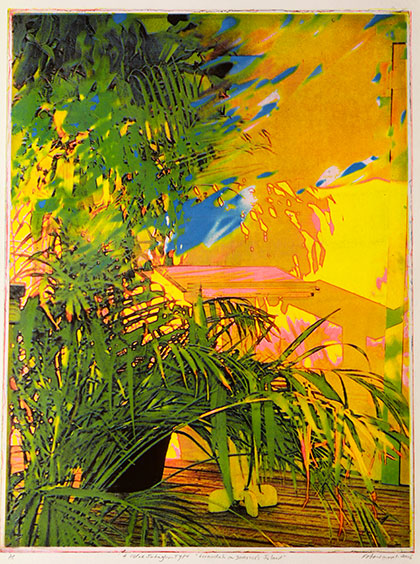 we are grateful to Jingfen Zhang, graduate of the nontoxic printmaking program at RIT, for her help in producing this documentation

Alan Singer: 'Spiral Gyra' | Spiral and projections of the nautilus figure on a Penrose grid of pentagons to highlight color and geometry.
Oil on Linen in two parts, 30" w x 60" h, completed in 2011

Alan Singer, Artist and Professor at RIT    http://singerarts.com
Alan Singer is a painter, printmaker, lecturer, and educator living in upstate New York. Born in New York City in 1950 to a family of artists and designers, Alan began exhibiting his paintings while still in college at The Cooper Union in New York City. Through college and graduate school at Cornell University, Alan won scholarships, and created work of distinction in programs held at Yale University, Norfolk, CT, at Boston University, Tanglewood, MA, and at The Skowhegan School of Painting and Sculpture, Skowhegan, ME.
Subsequently Alan has illustrated and published books and has worked as a graphic designer. He is also a published writer on the visual arts. Currently he is a professor of art in the School of Art, College of Imaging Arts & Sciences at the Rochester Institute of Technology, in Rochester, New York.
Alan's artwork has been featured in museums such as the Everson in Syracuse, and the Smithsonian in Washington, D. C. His work has also been featured in numerous solo and group exhibitions, primarily in the New York area.