Nowadays, it seems, we are reassured by "the science bit" in marketing.

Products as diverse as shampoo and yoghurt drinks

the seal of approval by an advertisement-scientist

in a white lab coat. It is doubtful that the item in question

is going to do us any harm, but the science is comforting all the same.

Ironic, then, that we are often so casual about

genuinely harmful materials in our homes and workplaces,

just because weve been using them for years without any apparent ill effects.

Over the last dozen years or so, in my practice as an artist, I would have used bucket-loads of nitric acid and assorted VOC solvents if I hadn't thought more about the science bit. I suppose I must have absorbed my dad's interest in chemistry (he was a science teacher in Frankfurt) and this joined together with a natural curiosity about the stuff of printmaking:

Was there an alternative to acids?

What do you get when you cross a lemon with iron chloride?

Can you etch with salt?

It wasn't so much that I wanted to meddle with the history of printmaking, just some of its ingredients. We are preoccupied by healthy living and I wanted to apply similar principles to healthy working. Meeting printmakers like Keith Howard and Robert Adam who were already developing ideas and practice in line with safer printmaking, galvanised my own experiments.

A lot of my methods are well documented and widely used. As with all processes though, they are - quite rightly - open to questioning. When my complete system of Metal Salt Etching was due to feature in Keith Howard's publication The Contemporary Printmaker in 2003, I was presented with the opportunity to subject my methods to rigorous scientific testing at Rochester Institute of Technology, NY. I have always taken advice from scientists, but here was an opportunity to have the many benefits offered by this new approach to etching confirmed by two leading experts in environmental chemistry.

And here comes the Science bit

Metal salt etching employs two processes for the range of metals commonly used in intaglio printmaking. The reddish salt, ferric chloride, is used to etch the warm-colored metals: copper and brass, while the blue salt, copper sulfate, etches the silvery metals: zinc, mild steel, and aluminum. Both these salts (FeCl3 and CuSO4) have been around for centuries but because they were often used in the same way as acids (and without the aid of a catalyst), their potential for etching had not been fully harnessed. Metal salts do not corrode metals by the destructive and harmful processes that typify acid etching; they in fact owe their etching ability to electrical attraction. The metal compounds that are dissolved in the salt solution elegantly and harmlessly remove the atoms of a metal plate.

Today we understand that this is an electrical kind of chemistry that is more akin to the workings of a battery than to the corrosive action of strong acids. Think of the rabbit in the Duracell ad: a battery on a full charge will give plenty of electrical energy while a weak or depleted one will result in a gradual deceleration. The difference lies in the strength of the electrical charge: the rabbit with the biggest charge keeps going for longer.

In 1997 I invented THE EDINBURGH ETCH, the catalysed version of ferric chloride, in which a small addition of citric acid literally dissolves the sedimentation of the iron salt; creating a much more potent, but safer mordant. This process has since been adopted throughout the printmaking world and etchers have likened its crisp biting characteristics on copper to Rembrandts (toxic) Dutch Mordant.

Now many printmakers know what lemons and iron chloride can do together.

Shortly after I published this research in Printmaking Today the electro etching expert, CEDRIC GREEN, noted that the Edinburgh Etch is ideal for etching copper but that a solution based on copper sulfate, The Bordeaux Etch, should be used for a safe zinc etch. And already, in the early 1990s, NIK SEMENOFF had been exploring copper sulfate based etching solutions. Intrigued by Cedric and Niks ideas, I introduced copper sulfate into my own research program. Trials showed that a straight copper sulfate solution makes a good mordant for zinc (but not for aluminum) but consumes a large amount of copper sulfate crystals.

I realised that once again the right catalyst would accelerate and improve the efficiency of the etching process. As before, I systematically introduced different ingredients to the process and monitored their effects, quantities, and by-products. I had a pretty good idea that due to its conductive effect in water, simple cooking salt (sodium chloride) might be the key ingredient. Most of my time was spent researching the perfect ratio of salt to sulfate. The addition of an exactly equal quantity of salt to copper sulfate dramatically increases the speed, quality and longevity of this new etching solution: THE SALINE SULFATE ETCH.

This solution now provides a universal etching bath for all three silvery metals: Zinc, Aluminum and Mild Steel, and will no doubt become an extremely useful method in the repertoire of printmaking. My students cant get enough of The Saline Sulphate Etch and use it on a daily basis, and in my own work it enabled me to etch the large-scale aluminum sculpture Shatter-Ice. For anyone who loves the physicality of etching it is an exciting and satisfying process to use.

A few years ago, at a conference on nontoxic printmaking in Barcelona I met Cedric Green, inventor of The Bordeaux Etch, who wholeheartedly approved of the latest addition to the metal salt method. During the same event Eva Figueras presented evidence that Goya had been etching zinc in copper sulfate but, unfortunately for printmaking, metal salt etching, for a number of historical and technical reasons, did not become mainstream practice until today.

So it was that in 2003 I presented my complete research on the Metal Salt Etching system to the RIT chemistry professors Dr Paul Craig and Dr Paul Rosenberg, for final testing and assessment. Dr Craig took an empirical approach and together we etched plates under laboratory conditions, making sure that all relevant data such as plate size, etching times, mordant strength etc., were faithfully recorded. Dr Rosenberg never needed to visit the print studio. He took an analytical approach in which all variables and by-products of the chemical reactions were determined through chemical formulae and calculations. The results of both strands of investigation were then formulated into a safety assessment for Metal Salt Etching which is published in The Contemporary Printmaker and can also be found on this website (Art Meets Science).

The assessment states that:

In the past metal etching for the purpose of printing or art was typically done with nitric acid, which has harmful vapors and is extremely caustic...The Edinburgh Etch adds one new ingredient to the etching bath: citric acid. Etching...is much more rapid and reproducible than the original ferric chloride etch...The Cu2 will have a tendency to form a complex with citric acidincreasing its solubility. The hazards associated with the Edinburgh Etch are dramatically less than those associated with nitric acid. In fact it could be safely used in an open studio or laboratory.

The Saline Sulfate Etch is recommended for etching aluminum or zinc (or mild steel). In the absence of sodium chloride, a copper etch of zinc is characterised by high levels of insoluble hydroxides...which may clog the etching process, for reasons like those proposed previously for the Edinburgh Etch.

For the printer or artist both these systems are mild and much safer than the traditional nitric acid bath for etching of metals, especially if proper precautions are taken (i.e. no etching of aluminum with ferric chloride) and when exhausted materials are disposed of properly. To the chemist, these are very nice systems, which are highly complex...There is not much published information on these systemsAll would bear some study from the chemical perspectiveThere does not appear to be any significant or major chemical hazards associated with the chemical processes employed here, although a reaction between aluminum and iron (chloride) could lead to explosive results.

Ball-and-stick model of the unit cell of anhydrous copper (II) sulfate
For more on copper sulfate go to: tripatlas.com/Copper(II)_sulfate 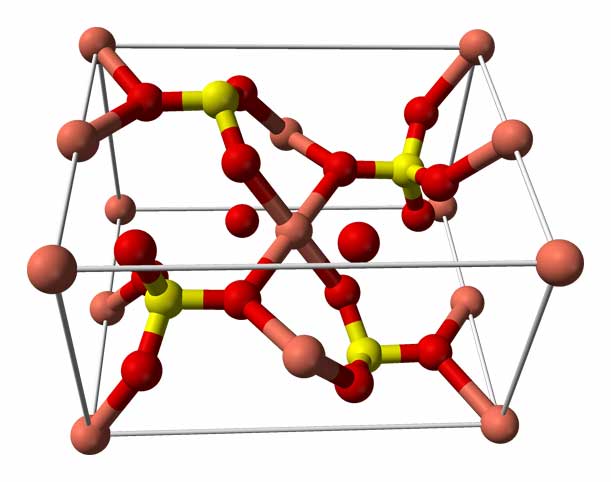 And that's the science!

A version of this article "Perfect Chemistry: Friedhard Kiekeben gets to grips with the science of non-toxic intaglio printmaking and explains his own pioneering discoveries" was first published in the international graphic arts magazine Printmaking Today, Summer 2004, ISSN 0960 9253.